Moonshades is a dungeon crawler role-playing game developed exclusively for the Android platform,
to restore the immersive atmosphere and experience of the old-school RPG’s. 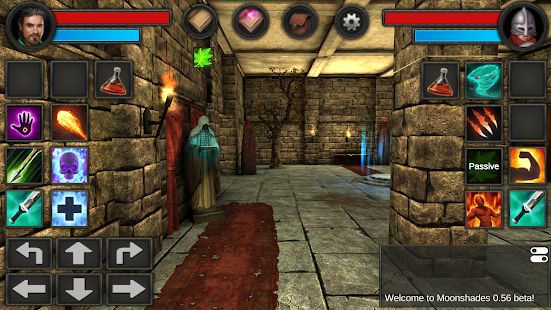 Moonshades is a dungeon crawler role-playing game developed exclusively for the Android platform, to restore the immersive atmosphere and experience of the old-school RPG’s.

In the Moonshades’ fantasy you can roam through an adventurous, labyrinthine underground world loaded with ancient magic and myths embedded in a compelling story. Wandering in this realm among the nesting monsters, a great amount of revelation and captivating missions wait for you with crafty traps, hidden nooks and corners, tricky elements and challenging quests over the ever tactical combats and spatial puzzles.

(February 2019)
The game is pretty new and still in a Beta version. There is not much content available yet, but the game engine and all major aspects work perfectly. I encountered almost zero bugs during playtesting so far.

The player creates two heroes that are about to explore a dungeon full of monsters and treasure. Character creation is fast and easy, it lacks typical 3D individualization of characters, but the game is meant to follow classical dungeon crawler style anyway.

The player starts right in the dungeon on level 1 and there is no real tutorial mode. Steering and interacting with the game world is really easy and self-explaining. If you ever played an old-school dungeon crawler you will have no learning curve at all. Within the dungeon you will find hints and notices explaining the basic game mechanics, some sticking to walls, others as notes in your diary or as hints when you tap on objects.

You will encounter an important NPC right away, the Blacksmith, who is also a trader. Sell or buy stuff here, the amount of things you can carry is limited.

Characters have health points and mana points (for triggering special abilities) and can acquire special skills during the game by finding skill books and expending skill points. The amount of skills is fair so far and includes things like ranged attacks, AOE attacks or group heal.

So basically, you start running around, bashing some skeletons and spiders and try to find the missing keys to locked doors to get that treasure chest behind it.

This game is the definition of old-school dungeon crawler. You really feel that the developer has a heart for the games from the 90s and it’s great fun to play. The sounds are not awesome, but graphics and gameplay are really good.

The game is not hard, I made it through to the currently available (dead) end without any effort, and I am not a crack player. In the beginning you might die a few times, but I feel the game could gain from an optional hard difficulty level. Also the amount of treasure is quite high compared to dungeon size and difficulty level.

The riddles and puzzles are well done but easy to solve. Basically it’s about finding the right key for a certain door or trying a combination of levers. There are a few traps also.

The game lacks some sort of background story yet, although a dungeon crawler does not necessarily need one. There are items in the dungeon that produce hints, but seem to be of no use or just decoration. There also doors that appearently have no way of opening yet (or are meant to be that way).

I guess with new content (further levels) this will become clearer. It’s good to see, that there is constantly new content released, graphics improved and bugs fixed.

Notice: The following maps and tips are not official or claim to be correct or complete (I am not the “I find every secret”-type of player). I created them by playing the game for orientation purposes and they are subject to change as new content is being release by the game developer. I am not able to update the maps within short time for every new release. If you find errors you can send them to me at info@daedalis.de anytime.

Tombs of The Cruel Wolf

Tombs of the Cruel Wolf Level 2