These pages are about a role-playing game that was pretty unknown when it was released back in the late 90s/early 2000s. A small Canadian company, producing a range of superb mecha miniatures, started by writing an adventure for the Mekton role-playing game, that finally evolved into a full-fledged hard scifi universe called The Jovian Chronicles. The game was never released in German, so these pages will be in English for now. Let’s start with some basics for people who never heard of this game.

The Jovian Chronicles was an RPG about a near future setting where mankind had managed to colonize several planets and moons of the solar system. Technology is not that much superior than today, without the exception of the exo-armour, giant humanoid robotic combat vehicles, that have pretty much replaced classical tanks and other vehicles in combat. The idea is taken directly from games like Robotech or Mekton and toy ranges like Gundam. 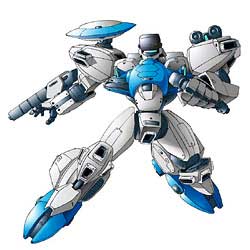 Personally I am not big fan of putting high-fantasy elements like mechas into a hard scifi setting, but in this case this worked quite ok. Several powers try to gain the upperhand throughout the solar system, while characters either zip around in their exo-armours on quasi-military missions or experience rather down-to-earth adventures of exploration like in Traveller – just on a much smaller scale. Most adventures will take place on orbital stations, TV series like Babylon 5 or The Expanse will get you a pretty good idea about dauly life in the solar system (minus the aliens). Several planet sourcebooks were released but only one adventure/campaign book. The background stuff was done well enough to easily create interesting adventures for many gaming sessions, though. The books deliver interesting details about several vehicles or places, the political machinations and background story could have used some fresher ideas on my opinion. It’s all in all Cold War in space and therefore a bit stale.

The game system is the Silhouette Game that is being used for some other games from DP9. It is a basic D6 system, attributes usually range from -3 to +3, 0 being average. The emphasis is less on character stats here, as many chars pretty much look alike on the record sheet. The published books were very well designed, DP9 clearly had some talented designers on the team that were able to produce realistic looking cut-aways of spaceships as well as action-loaded colored images. The playing rules work pretty well, the success system and especially the damage system need some time to get used to. 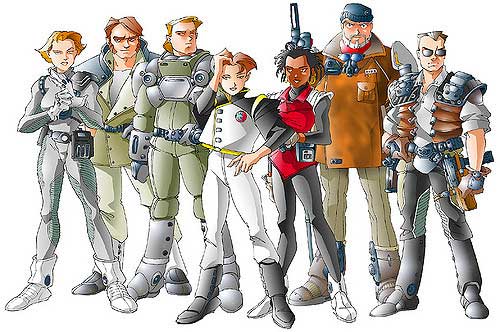 An attribute of +2 means you roll 2D6 and count any rolled sixes as a success (=1). Depending on the given difficulty threshold you not only see whether you managed the job, but also how well you’ve done. The more successes you have beyond the minimum required, the better the outcome or effect. Weapons have a damage multiplier that is combined with the Margin of Success of an attack roll. 2 successes x 8 base damage would make 16 damage that way. Characters don’t have Hit Points, they have Wound Thresholds, whenever the total damage exceedes a threshold, the char would gain a minor, major or fatal wound. That means a 9mm pistol cartridge (DM 15) can produce 0 damage, 15 damage (1 success), 30 damage (2 successes) and so on. As Wound Threshold is a secondary stat calculated from other attributes by multiplication, this value is also found in rather huge steps with no minor steps in between. Just feels a bit blunt, but it works. The same is used for mecha or spaceship combat, but on a different scale. Not unlike games like Rifts, the system is designed in a way that large scale weapons can use the same stat ranges as small scale weapons (a huge space cannon could have DM x20, pretty much as an Assault Rifle). The space cannon would do x20 damage to other spaceships but x200 damage to human sized targets (but it can’t hit such tiny targets on purpose). If man-sized weapons are used against vehicles, the armor value of the vehicle is treated as being x10 higher (making man-sized small arms fire against exo-armor pretty much useless). Tactical rules for playing vehicle combat (ground, air, space) on hex-maps are provided and pretty well done. The 1st Edition rulebook came along with a handfull of exo-armor and spaceship decsriptions and stats. Later DP9 released a series of books that presented exor-armor and ships in much greater detail. They also released design rules to create your own vehicles. These rules tried to be pseudo-scientific and were pretty much a mess. They released errata and corrected vehicle stats in almost every following publication, which again had mistakes. Many stats found in the books can not be created with the construction rules, they were simply made up and often enough out of range. As the game was not experiencing the expected or necessary success, after a few years no further books were released and DP9 focused in it’s major game – Heavy Gear and the large miniature range for it.

The basic gaming rules of JC are pretty well done and don’t need much tinkering in my opinion. The vehicle construction rules found in various books are missing some aspects or are too convoluted and badly edited to be used. The record sheets of vehicles are often full of obvious errors, mostly typos (showing 300,000,000 where it should say 3,000,000) but also calculation errors. As creating vehicles by these design rules is really exhausting and cumbersome, even the editors at DP seemed to have no intention of going through it over and over again, thus most vehicle designs are clearly wrong. Not wrong in a game-breaking way, but wrong according to the design rules. One could argue that this is just a fantasy game (with a futuristic setting) and that DP9 was the final arbitrator to say what is right and what is wrong. That would have been ok if they never provided us with design rules, claiming that their own vehicle design were done according to these rules. Yes, I might be overly pedantic here, but I also paid a very high price for these books and I really do like the setting and the game. DP9 released some errata and the community produced good content about ten years or so ago. Today nobody seems to care enough about this game any longer. While looking for a fitting vehicle construction ruleset for my own scifi setting, I started playing around with the Jovian Chronicle/Silhouette rules again.

An overview of all published rulebooks and sourcebooks for the Jovian Chronicles RPG can be found here: