Fire dragons (“dragoi elde”) are among the most aggressive and largest dragon species. They are taller and stronger than their fellow species, their bodies more massive and heavily armored. They are usually coal black, especially old kites develop a faint red pattern. Fire dragons, as their name suggests, can produce magical fire and hurl fire at their opponents like a firestorm or breath. They are completely immune to magic fire, whether it’s their own flames or a wizard’s spell. Natural fire only bothers them when it is very massive and completely envelops them for a longer period of time. Dragons are generally very intelligent creatures, and fire dragons are considered the most cunning of them. They live for many hundreds of years and gather experience, secret knowledge and treasures. However, most things that people are interested in leave them completely cold – only rarely do dragons interfere with the concerns of the tiny creatures.

“You don’t know what pain really is, until you have felt the cold dragon fire burn your skin and your soul. “ 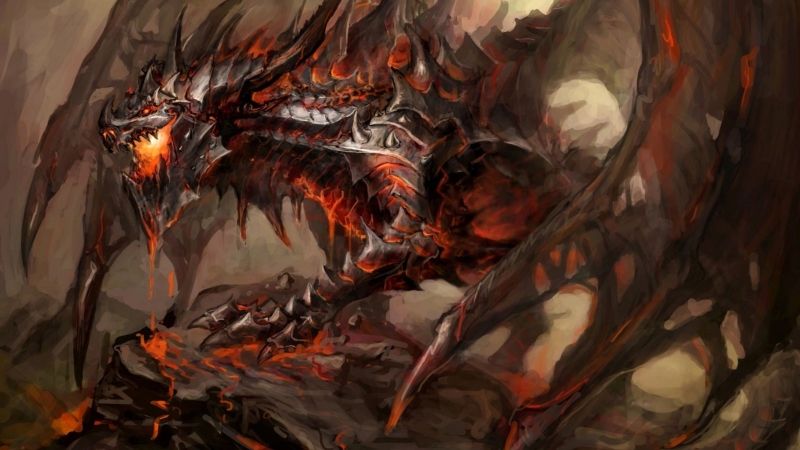 Adult fire dragons are up to 14m long, 8 tonnes heavy and stand upright about 4m high. They have strong jaws with large dagger-like fangs, four strong legs with big claws and a long tail. In addition, they have a few large leather wings on the back, which they can fold up like a bat. The wingspan is at least 16m, in older kites it is often much larger. The flight of a dragon is less elegant than that of birds, their bulky bodies are clearly too heavy for the size of the wings. Fire dragons use an unknown form of magic to be able to fly anyway, which, however, quickly depletes them. Perhaps this is one of the reasons why dragons are not spread all over the world and, after several years of activity, sometimes decom- pose for decades to deep sleep in remote places. The older dragons get, the longer these rest periods are, there are supposed to have been old fire dragons who have been sleeping for over 150 years.

Dragons feed on large animals such as mammoths, bison, cattle and horses, which is why they attack and devastate homesteads and farms. They require large amounts of meat, sometimes up to 25% of their own body weight. They devour their prey in one piece and finally digest it completely. Even steel and wood will not withstand their strong stomach acid in the long run. They also regularly swallow rocks to aid digestion. From a full meal, a dragon can consume about a month before he seeks to supply again. His body can also create fat reserves, from which he can consume up to 2 years without food intake. In cold temperatures, fire dragons slow down. At temperatures below 20 degrees Celsius, they stop eating, become colder (about 10 degrees Celsius and less), retreat into caves or dig into the ground. They can survive frost, but very low temperatures below zero can be dangerous to them.

Fire dragons are solitary and males only go to search for females every 15-20 years. After fertilization about three years later they lay 3-5 eggs in an extra built nest. This consists of large amounts of rotting material that releases heat through bacterial decomposition. The female always stays close to the eggs and defends the nest against invaders. The eggs have a rock-hard shell and are dark gray with a small pock-like surface. The eggs react to the ambient temperature, this is permanently below 28-30 ° Celsius, will hatch exclusively females, at temperatures above 33 ° Celsius exclusively males. If the temperature is in between, males and females develop equally. After about 4 months, the young dragons start to make sounds and the mother digs them out. The hatched young dragons and the mother stay near the nest for about 1 year, after which she leaves her brood and the little dragons have to survive alone.

Fire dragons can be found in remote mountaineous regions in the South and East. They prefer warm and dry climates, often their lairs can be found in deserts and wastelands. Vegitation has no meaning to them, yet their prey, large mammals, can only be found where sufficient food such as grasses and shrubs grow. Fire dragons typically inhabit natural stone caves, only occasionally do they dig underground cavern themselves.