Without the help of magical constructions that create artificial gravity aboard spaceships, there are actually only three options to have some sort of gravity in spaceflight:

Option 1 works perfectly as long as you can accelerate your ship towards its destination at 1 g. This creates an artificial gravity that is very close to Earth gravity. As soon as you cut off the engine and continue coasting towards your destination, the entire ship will have zero-g again. External forces may change the experience of gravity under thrust (like something hitting the ship hard) as well as any additional thrust vectors, from minor course corrections for example. As soon as you have to change your course, the crew will experience major trouble aboard, as the plane of gravity will shift and pull people and things into undesired directions. This will happen when you swing around the ship by 180° while under trhust to start the deceleration process. This should be done without thrust from the main engines, the crew will have to prepare for a zero-g maneuver.

Option 3 is very hard to achieve. This is where usually magical devices are being introduced. You most likely see this on ship designs that resemble ocean going ships. There is no “down” in space and therefore no need to align deck level floors as you would do on vessels on Earth (90° towards the center of gravity = Earth core). On the Enterprise you would need artificial gravity generators under the belly of the ship, to make people stand upright like aboard an ocean liner. The thrusters of the ship point 90° to the side, though. As they would produce a lot of additonal pull at Warp speed, your gravity generators would have to work in a way that does not create real mass (as this would pull your ship off course) and that counters the pull generated by the thrusters. A lot of magic involve here. 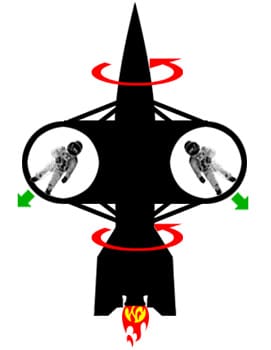 Option 2 is probably the most likely way to produce gravity for spaceships, although in the basic version it is not ideal for moving object like ships, but pretty much the choice for space stations. The problem with spin sections is that they only work as intended while the ship is coasting without thrust. Otherwise the gravity produced from the thrusters and the gravity created by spinning the section or spin wheel (pushing everything within towards the outside hull wall) would add up pulling the crew and interior stuff into an undesired direction.

In DP9’s RPG Jovian Chronicles the designers came up with the idea of using gimbaled centrifuges. The habitat modules are placed into a spinning wheel and can aligned with the vector of the ship while coasting or swung inside to gain from the pull generated by the main thrusters while the ship is accelerating or decelerating.

The following image from projectrho.com tries to explain this. I just added a few icons to make it clearer ( I hope): 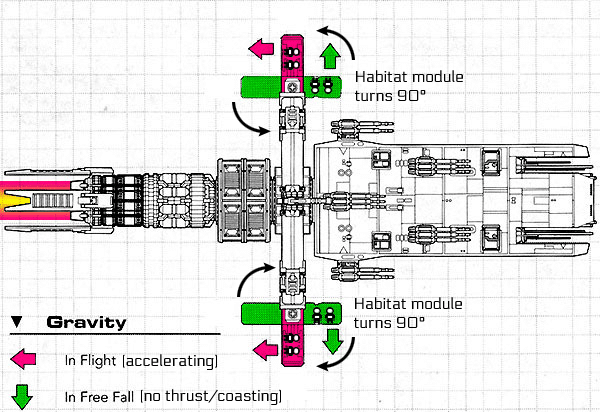 Notice that the habitat modules would only go to green position while the ship is coasting, that is, flying towards a destination under constant speed and no thrust and expecting no sudden maneuvers or attacks. If there is even the slightes danger of being hit by objects or being forced to make sudden drastic maneuvers, the habit modules would have be set to red position. This will create zero- or low-g conditions for the crew inside (which is expected to man the zero-g stations in the main hull under such conditions anyway). Changing the habit module positions under thrust or while maneuvering, can create unwanted effects inside as the plane of gravity is shifting in a way that the interior is probably not designed for.

The following images show some centrifuge constructions the ships in this rpg use. 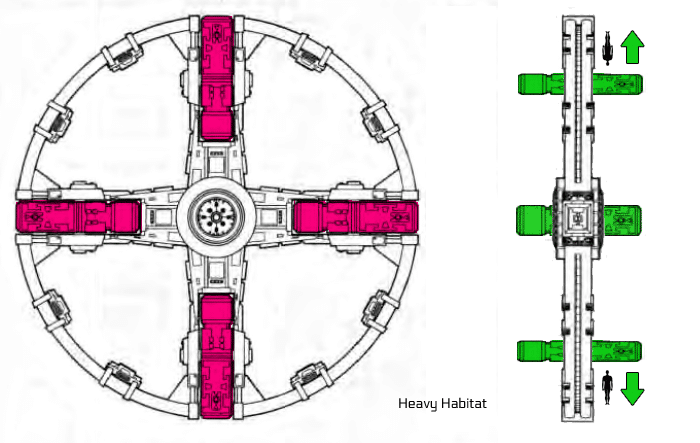 They also point out that the diagram given in one rulebook is confusing. It implies that the decks within the habitat modules would stack up like the floors of a slim and tall skyscraper, which is not very efficient. As it seems the designers wanted the the decks to be running parallel to the long axis of the module, which makes more sense. I tried to show this in the following image. The green area shows a habitat module and it’s interior as I imagine it. The left green area shows the topdown view while the right area shows the habit module from the side at it’s position in the rotating wheel. 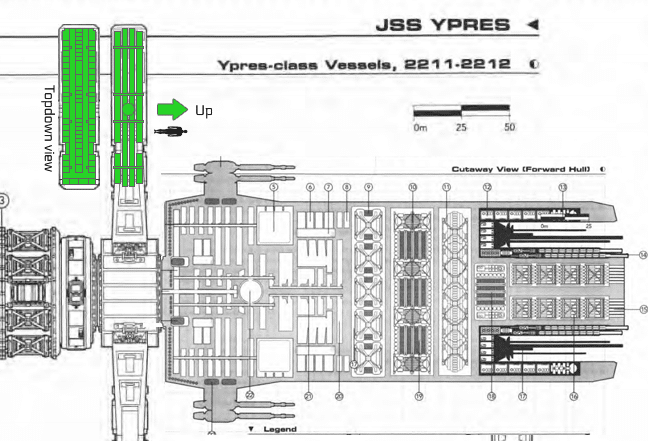 Even on space stations, where you have no thrust and hopefully no impacts from the outside, inhabitants still have to adapt to a lot of strange side effects. The coriolis force makes everything different aboard a space station. Gravity will differ between your head and your feet, giving you a light head and heavy feet. The difference is small, but humans are very sensitive to those effects. You will not be able to pour water into a glass like you would do it on Earth or throw a ball towards someone opposite to you.

The following image from the TV series “The Expanse” (found at projectrho.com) impressively demonstrates that
you will actually have to pour fluid besides the vessel and trust on the coriolis force to bend it into the glass. 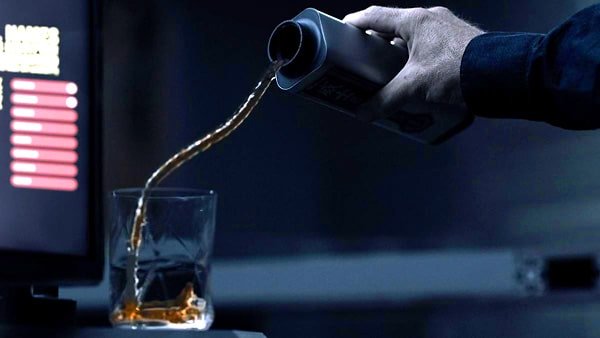 At projectrho.com you can also watch a video with a simple experiment that demonstrates, that moving objects will become very hard under artificial gravity conditions. It will require a lot of training to adapt to it. It is unclear, if all our senses will be able to fully adapt to such conditions permanently or not. It is not impossible that living under artifical gravity conditions will require some sort of mutation to the physique of people or not work well.

The construction and maintenance of the spinning wheels with foldable habit modules is very complicated and prone to mailfunctions. There are many things in space like radiation or vacuum cementing that will make designs like this very costly. Considering that many ships (especially military ones) will not coast a lot but use thrust to reach their mission target as fast as possible and that battle situations prohibit the usage of the spinning wheel, it seems to be vastly too expensive for the gain. Another factor is that the spinning wheel section is rather large and fragile. Shooting it with a small railgun slug will most likely not rip it off completely but turn it into a dangerous wreck which endangers maneuverability and stability of the entire ship. Dragging the sluggish pieces of a destroyed habitat section behind you is a great risk to the rest of the ship. One shot through the section that connects the spinning wheel to the main hull (and powers the rotation) will make the whole construction useless.